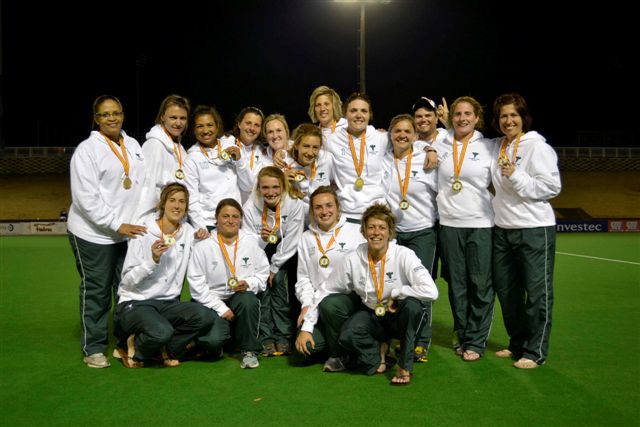 SOUTHERN CAPE NEWS – The Southern Cape Ladies Hockey team won the “B” section Inter-Provincial Tournament which was held in Randburg and tasted gold for the first time in history.

It is also the first time in the history of hockey in the SWD that the ladies are amongst the medal winners, only just missing out on a bronze medal during last year’s competition.

The ladies played in a nail-biting final against the home team, Southern Gauteng “B” (Kaspersky Nuggets).

No goals were scored during the first half, but Southern Cape scored the first goal from a penalty corner early in the second half when Diane Jonker made no mistake. Southern Gauteng equalized shortly thereafter.

The game finished in a draw at full-time and the Southern Cape ladies only managed to seal the deal in the last 20 seconds of extra time, with a great field goal scored by Tristan Schroder.

Diane Jonker coached the ladies for the last four years and although it was not always easy, she believed in the girls and all her hard work paid off.

These tournaments are very expensive and the sponsors played a very important role in the success and performance of the team and therefore the team would like to thank Wedding & Functions, Chemtoll, Metsi Chem Ikapa, The Office Princess, Incident Support Services /Aquatic Protection Group, Protea King George Hotel, Neil Kruger and Roelof Roeloffze Golf Coaching.